C is for Comet Brews 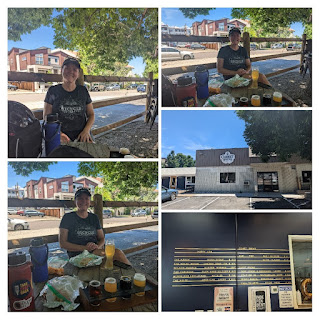 As you know if you've been following the A to Z Denver Breweries series of posts, the SheppyBrew Beer Model and I decided to push on with the 4th round of the project.
Not too long ago I started with A is for A Bit Twisted Brewpub.
Then, I continued on with B is for Bull and Bush Brewery.
As I mentioned last time, according to the Colorado Brewery Map & List, we had a ton of "C" breweries that we could choose from.
A couple of weekends ago, my wife (aka, the SheppyBrew Beer Model) wanted to get out on her bike. It was really hot and so neither of us really wanted to go real far.
It just so happens that we have a "C" brewery right in downtown Littleton, which is a nice little bike ride from our house.
C is for Comet Brews 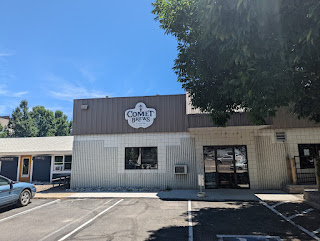 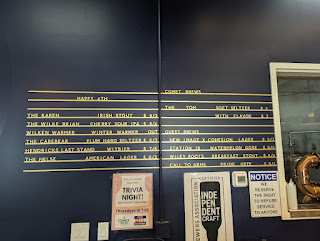 Interestingly, even though they don't serve food, they have a decent list of guest brews. I'm not sure how they pulled this off. At least a couple were collaborations, so maybe they all were.
Regardless, they don't serve food so we packed a lunch.
They have a nice little taproom, but we ate and drank in their tiny little beer garden outside. 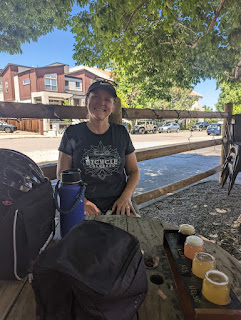 All the Comet beers are named after people they know ... mostly family.
We had tasters of:
We also got a flight of their "guest beers": 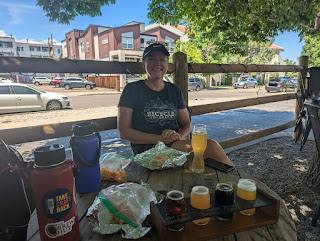 It is a nice little brewery and extremely convenient for us living so close.
If you're in the area and they are open, stop in for a visit.
---
---
As you probably realize, next up we have to pick a "D" brewery.
Again, according to the Colorado Brewery Map & List, we have a bunch to choose from. I actually have one in mind, but we'll see if we actually go with that one or hit another.
Keep an eye on  Sheppy's Blog: A to Z to see what we pick.
And ... as always stay tuned on the regular SheppyBrew Channels to see what is happening with biking, brewing, barbequing, and other things: SheppyBrew's Facebook Page; Sheppy's Twitter Feed; SheppyBrew's Instagram Page; and SheppyBrew's Website.Of course, don't forget to visit this blog often as well!
Posted by ESheppy at 7/23/2022 06:42:00 AM