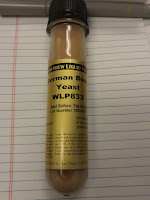 As promised, I brewed an International Amber Lager this past weekend.

I named it Ulterior Motive Amber Lager because I my my ulterior motive for batch is to use it as a starter for a dopplebock that I will brew it a few weeks. That is also why I picked WLP833 German Bock Lager as the yeast.

I have not published the dopplebock recipe yet, but I have mostly entered it into Beer Smith. Stay tuned at the SheppyBrew Website to see what the final recipe looks like.

It was cold outside, and my patio was snow-covered, so I decided to brew in the garage.

This isn't unusual during the winter. 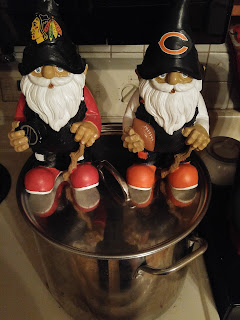 I did heat up the strike water on the kitchen stove. This isn't my usual procedure, but I have done it a couple times in the past.

I even started the mash in the kitchen. 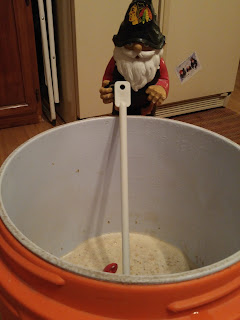 Then, out to the garage for the mash rest. While the enzymes were doing their thing, I headed off to the health club to get my fitbit steps in,

I used up the last of one propane tank heating up my strike water, but luckily, I anticipated that and had a full propane tank ready to go for the boil. 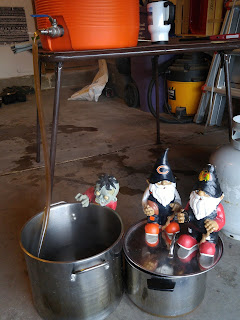 My original recipe only had .25oz of Columbus hops for bittering. That left me a bag with just .25oz left to put back into the freezer. I decided to throw in that extra .25 oz in the boil at about 10 minutes.

This makes the beer more balanced than I think this style generally is, and maybe will add a bit of hop flavor that would probably reduce my score in competition, but I'm not going to enter this beer in a competition, so I'm ok with that. 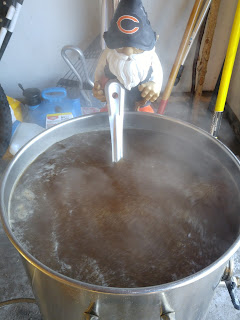 Everything else went fine.

I got most everything finished and cleaned up well before noon. I even went back to the health club to get more fitbit steps. 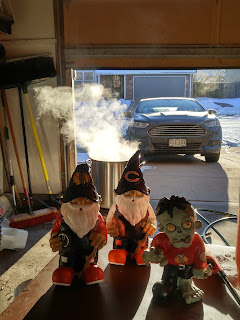 Then, the rest of the day was spent watching NFL playoff football and preparing homemade barbecue sauce and chicken breasts for grilling.

I also watched the mighty Blackhawks beat up on the evil Avalanche.

Fermentation got a slow start, but seems to be moving pretty well now.

And now, I'll let this beer ferment. In a couple of weeks, I'll keg it and harvest the yeast. I'll brew my dopplebock shortly after kegging Ulterior Motive.