I is for IronWorks Brewery and Pub

You may remember that as I was composing the list of Denver breweries to visit, it struck me that most of the letters of the alphabet were covered by the beginning letters of the brewery names.

And for G? What did I pick for G? G is for Great Frontier Brewing

You probably know that after G comes the letter H. And ... H is for Hogshead Brewery 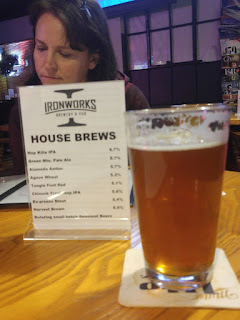 If you know your alphabet, you can easily figure out that next in my list is the Letter I.


I is for IronWorks Brewery and Pub

Ironworks was established in 1990, making them the oldest brewery in Lakewood, CO.

Right on the home page of their website, Iron Works proclaims ...

To be very honest, based on the couple of beers I had there,I would have to disagree with that quote. We had just come from Hogshead Brewery (as in H is for), and I would pick just about all of the beers I sampled there over either of the beers I had at Ironworks.

But, Ironworks, unlike most of the Denver Area Breweries I've been visiting has a full menu of food.

This is the perfect place to visit if you like the pub atmosphere, want a meal, and want to hang out watching a game or play some pool or throw some darts.


"A true neighborhood bar with all the personality and character that makes for a relaxing and fun atmosphere."

Unlike your typical "dive bar", though, they make their own (pretty decent) beer.

My wife keeps telling me she wishes more of these places I want to visit served food, so she was pretty glad that I dragged her to this place. 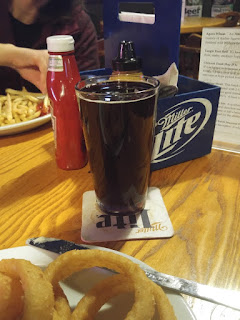 Their Phone number and email are:


Next up in my little alphabet journey of breweries is "J". At the moment ... I'm thinking
Either

Let me know in the comments below if you have another suggestion for "J". Or, really, any local breweries you think I should try. If you know of breweries that start with any of the letters K, N, Q, U, W, X, or Y, I am especially interested in hearing those suggestions

That way you can see all the breweries I come up with...