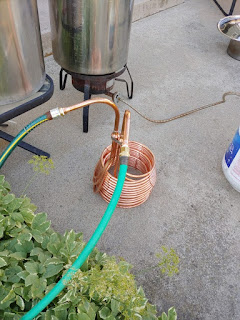 It is a pricey wort chiller, but it makes some fantastic claims.
It is fast.

The wort chiller that I've owned forever is not so fast, especially when I brew large batches. Honestly, I've spent over an hour chilling wort down to pitching temperatures. It has improved some now that I recirculate with a pond pump, but still my wort chilling has been quite slow.

I decided to give it a try based on advertisements on my new favorite podcast: Brülosophy.

And, even though I've only used it twice ... I think the expense was totally worth it. 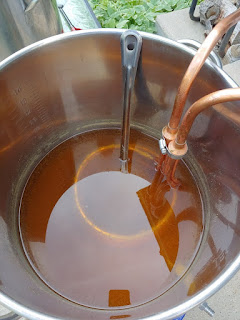 The first time I used the new chiller (see 2019 Hail Storm Summer Saison (batch 259) ), I thought it was quicker, but didn't really think the claims were justified.

But, I didn't really put a stopwatch to or record the chilling time.

The second time (see On Your Left (batch 260)), I paid closer attention. 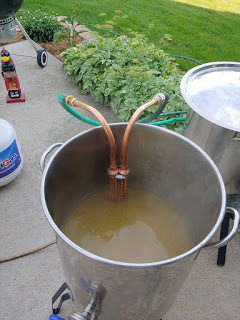 At this point, I realized that 94 is less than the temperature at which I usually switch to ice water through the pond pump.

So, I went and got a pot with ice water and the pond pump.

When I returned, my stop watch said 10 minutes. The wort was at 72 degrees. I didn't actually measure my ground water temperature, but I assume it is probably pretty close to 70.

Next time I'll remember to record the ground water temperature. 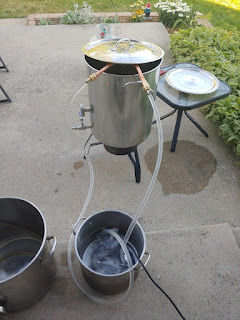 With the pond pump, I got the wort down to 59 degrees. This was probably 30 minutes after turning off the gas.

This is much faster than I've ever gotten down that low with the other chiller even with the pond pump.

However, my experience doesn't match the product claims.

First, Jaded suggests to keep the wort or chiller moving. I did notice that I could see the needle moving quicker when I moved the chiller around in the wort.

Also, they suggest using shorter hoses to help increase the flow rate. My output hose isn't short at all.

When it comes right down to it, I'm pleased with the Hydra performance. In fact both times, it cooled faster than I was prepared to switch to ice water re-circulation.

Next time I brew, I will time the cool down again, and I am planning on following the recommendations.

Keep an eye on Sheppy' Blog: Hydra and you'll see what happens.