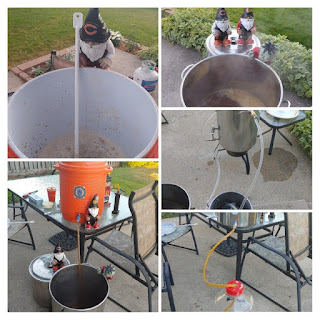 If you follow SheppyBrew on the blog or facebook or instagram, you probably realize that the Brew Master (aka me) has really done a lot of cycling over the past few years.

While out on the bike, several times a day, I will announce himself to slower riders and pedestrians with "On Your Left". At some point I thought ... "that would make a good beer name".

I thought the low alcohol of the Ordinary Bitter style of beer would be appropriate for a cycling themed beer, but I didn't want to just make an English bitter.

I decided to add Golden Naked Oats and keep the color on the lighter side of the style. I also decided to add more of an American hop flavor, using Galena hops.

Check out the recipe:

A couple of things that I've taken from those episodes is that cutting down on mash time and boil time generally don't seem to negatively affect beer, but cuts quite a bit from the brew day. 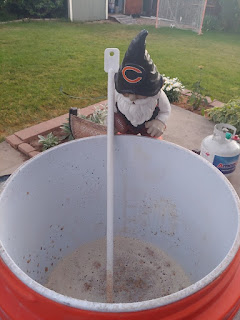 So, I incorporated those couple of time savings in the recipe. I mashed high and cut my mash time down to about half an hour. Likewise, I cut the boil time to half an hour.

I forgot to add my salts to the mash and decided to put all those in the sparge water. 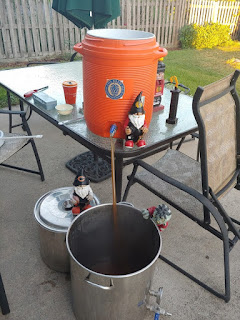 A little after 6:00, I poured the entire amount of sparge water into the mash tun, stirred, and drained it.

My gravity was low. Not sure if this is more due to the shorter mash time or because this recipe uses so much less grain than I usually use. I might reduce my planned efficiency in Beer Smith next time I do one of these "Short and Shoddy" brews.

I compensated by adding some DME to the boil. 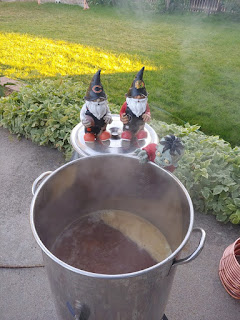 My boil timer started at about 6:25 AM. Because of the 30 minute boil, I was chilling before 7AM.

As you may remember ... last time I brewed, I used a fancy new immersion chiller from Jaded, "The Hydra".

It is much quicker at chilling than my old chiller. Just like last time, I found myself behind getting the ice water / pond pump going. The wort was close to 70 by the time I started circulating the ice. Usually, I start when the wort is closer to 100 degrees. 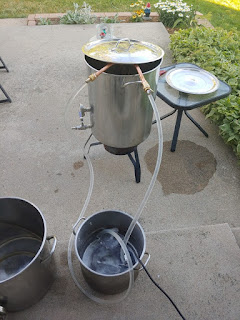 I had the wort down below 60 degrees by the time I transferred into the fermentor. I had my fermentor filled, the yeast pitched, and the fermentor in the basement by 7:30.

I actually had everything mostly cleaned up before 8AM.

Up at 5AM. Done brewing by 8AM. Nice! Lots of time to do other things on a weekend day. 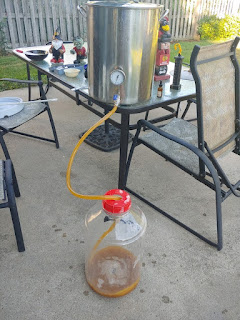 Email ThisBlogThis!Share to TwitterShare to FacebookShare to Pinterest
Labels: Biking, Brewing, Hydra, On Your Left, SheppyBrew, Short and Shoddy