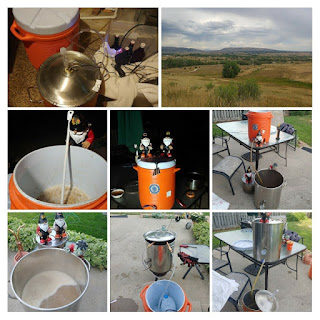 We might be seeing some of the T.Ra.Sh family towards the beginning of August, so I thought I'd brew it again.

It is a nice clean golden beer with just enough hops to balance out the malt sweetness and give a little herbal noble flavor in the finish.

I'll have to turn this beer around quicker than a "traditional" lager process, but I actually don't usually follow traditional lager processes anyway.

Still ... this may be quickest I've ever brewed a lager grain-to-glass.

Anyway, Sunday was brew day for me. 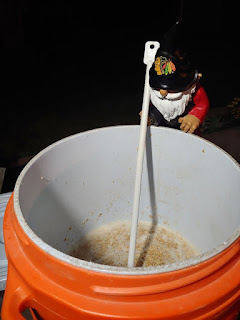 I was up just a little after 4AM for this brew day.

To be honest, the brew day didn't start out as smoothly as I would have liked. I had forgotten to make a starter the day before, so I made it while heating up strike water.

I made a mistake and added twice as must DME to the starter as I should have. I realized it, and decided to add enough water for the extra DME, and poured half into a mason jar to use next time I need to make a starter. 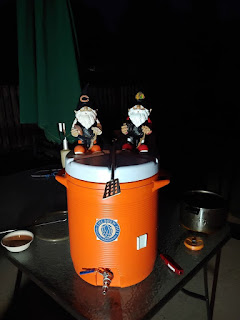 We'll see how that goes for me. I'll probably like having this mason jar pre-made ... if I can only remember that I have it.

While making the starter, I overshot my strike water temperature by a bunch (it was boiling).

I reheated. Finally around 5AM, I got the mash started. Shortly after, I had the starter on the stir plate. 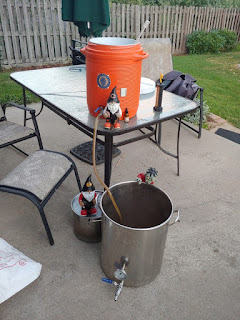 So, the sun was up when I collected the wort. My pre-boil volume was low, and my gravity high.

Easily fixed with some water to dilute. 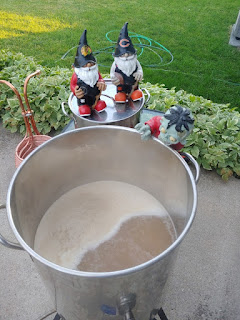 The boil went great. I got the right things added at the right points in the boil. I also did a really good job of cleaning as I went. 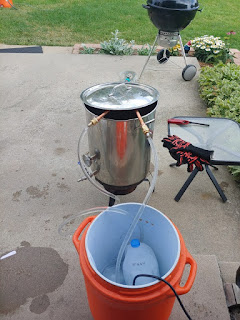 I was chilling the beer by 7:30 with my new Hydra - "World's Fastest Immersion Wort Chiller".

After 5 minutes of chilling with the hose water, I switched to my pond pump.

I was able to transfer beer in the 50's into my fermentor.

Like last time, I didn't quite get the performance listed on the Jaded website, but honestly, 5 minutes is almost too quick for me to be ready to switch over, so I'm fine with how the chilling went. 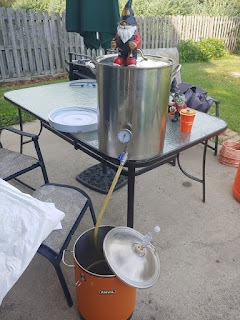 Much better than my older wort chiller.

I'll share details in a future blog post. Keep an eye on Sheppy' Blog: Hydra and you'll see what happens.

So, I set up my Anvil Cooling system, and cooled another few degrees before pitching the yeast. 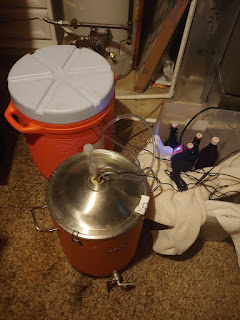 The beer is currently fermenting in the low 50's. I'll be ramping up the temperature fairly quickly on this one to try to get the beer to keg in early August.