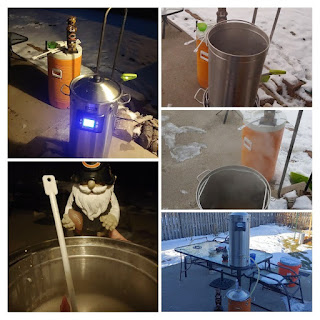 Schreck Gartenzwerg. Fright Gnome.
Last year, I came up with a German Pilsner recipe.
The grain bill was 100% floor malted German pilsner malt.
The flavor hops were the "new" German hops Hallertau Blanc and Huell Melon. I also included an ounce of each in dry hops.
Maybe not a completely traditional German Pilsner, but it was really delicious.
I thought it was an awesome beer. I even brought the keg into work to share at a "happy hour". It was well received.
Of course, that meant it didn't last long.
At the time I thought I should brew it again. Maybe multiple times. Since that first batch, I have not brewed it.
Until the weekend after Thanksgiving.
Schreck Gartenzwerg Pilsner 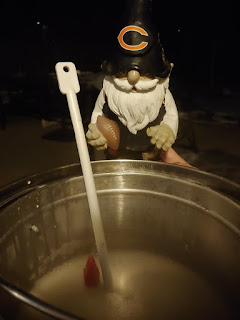 This is the 5th batch of beer I brewed on my Anvil Foundry. I'm still getting used to using it, but I think I'm getting there.
As usual, I got up early. I had set up the Anvil Foundry timer in the garage to start heating before I got up. By the time I was awake, the water was up to strike temperature.
I moved the warm water to my patio and mashed in my grains. I had forgotten to include my water salts the night before, so I added those to the mash. 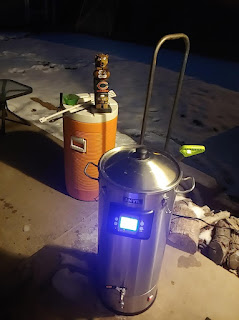 Every 10 minutes or so, I stirred the mash.
After about 45 minutes of mashing, I raised the temperature to 160, and went through a manual recirculation until I got the wort clear. 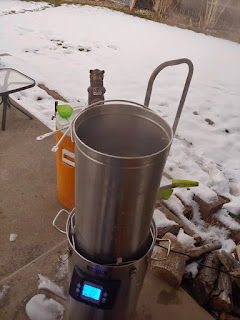 Then, I pulled out the grain sleeve out to drain. I set the temperature to get the wort up to boiling.
I timed it. I got from 170 to boiling in 25 minutes. According to some posts on a facebook group, this is apparently pretty quick for the Foundry ... especially for the Foundry at 110 volts. 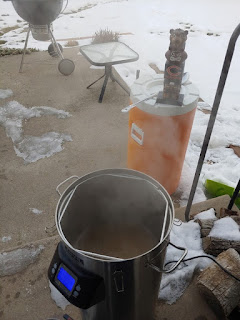 My pre-boil gravity was a bit high, so I diluted with .5 gallons.
The boil went well. I got the right ingredients added at the right time. Can't ask for much more than that.
OG was right on plan. 1.048. 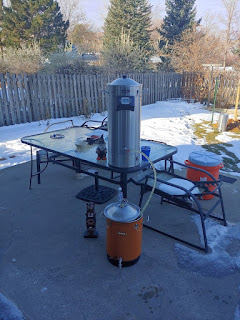 I used my Hydra chiller again. I got the wort into the 50's without using ice and pond pump. This is one of the best parts about brewing in the winter.
I drained the wort into my Anvil fermentor and left it outside for awhile to keep cooling below 50.
My yeast starter never seemed to get going, so I headed up to my localest LHBS to pick up dry lager yeast. I pitched that along with the starter.
I set up the cooling system on the fermentor.
Clean up went pretty quick. 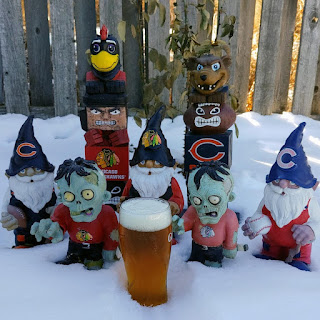 I had some homebrew after finishing up brew day.
By the next morning, fermentation was going. I kept the beer at lager temperatures for the first week, then let it rise to finish up.
I should be drinking this before the end of the year.
I'm looking forward to drinking it.
As always, stay tuned on the regular SheppyBrew Channels to see what is happening with beer and other things: SheppyBrew's Facebook Page; Sheppy's Twitter Feed; SheppyBrew's Instagram Page; and SheppyBrew's Website.