Hmmm... remember I told you about the social media "International #IPADay" on this blog (August 4th)? Apparently, the powers that be decided that it was such a huge success that they would go ahead and follow it up with International #StoutDay on November 3rd. I'm not sure how they defined success, but I suspect it has to do with the number of #IPADay hash tags you could see on twitter that day (http://twitter.com/#!/search/%23ipaday).

I didn't post Hoppy #IPADay and @IntlBeerDay until the day of the event. Many other bloggers made posts on the days leading up to it. So, I figure I'll get a head-start on International #StoutDay . I actually updated my paper.li to include #StoutDay, so now it is the "Daily #IPADay and #StoutDay News". There has not been a ton of stuff there so far, but I'm sure it will pick up closer to November. 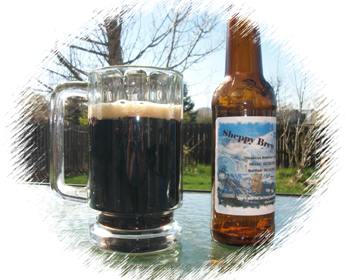 Of course, SheppyBrew's biggest stout-brewing success is its Stouticus American Stout. Stouticus was created after the COO my company declared that I should make an official company beer. When I asked what kind of beer it should be, the only real concrete suggestion was for the name "Stouticus". The name pretty much dictated the basic style.

I shared the batch of Stoutics with my co-workers and it was a hugely popular. Even people who told me they are not fans of stouts told me that Stouticus was great. I don't think they were just saying that to be nice. I think people really thought it was an awesome beer.

The other day, Mr. COO was telling one of our newer employees how great Stouticus was and I mentioned to them that Stouticus was the first stout I ever brewed. I'm not sure why that popped into my head, but that was a complete lie. I did correct myself.

Of course, I have also brewed Tweedle Beetle Imperial Stout and Leprechaun Stout.

Tweedle Beetle Imperial Stout is (as the name might imply) an imperial stout. It had the highest original gravity and highest alcohol of any beer that I have brewed so far. I am attempting to keep a few bottles to see what age does to this beer. So far, it is fantastic. Unfortunately I only have 6 bottles left.

Leprechaun Stout was gone long ago. I brewed it to be ready for St. Patrick's day 2010. For the most part, it is a nice normal American type stout. Except I included some peppermint extract in the wort. Initially, I thought I ruined a perfectly good beer, but by the time I started drinking it, the peppermint had blended with the chocolatey notes in the base beer to create a flavor that reminded me of a girl scout thin mint cookie. It was just an awesome dessert beer. I think at some point I am going to brew Stouticus with peppermint just because I sort of miss this beer.