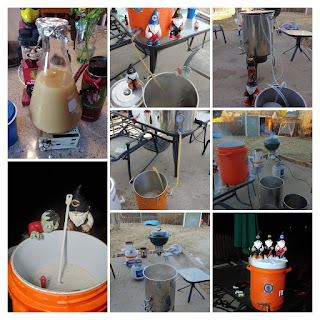 Back in December, we had to visit rural Illinois for my father-in-law's funeral.

While there, we saw my wife's sister who lives in Galena, Illinois with her husband, Dave.

Dave told me that his yard was overrun by wild hops, and that he had collected some over the summer. He had them in his freezer.

He asked if I could do anything with them, and of course I said I'd take them.

So, he brought them to me in a plastic bag and I flew them back to Colorado.

They have been in my freezer since then.

Until this past Sunday. Sunday I made.... 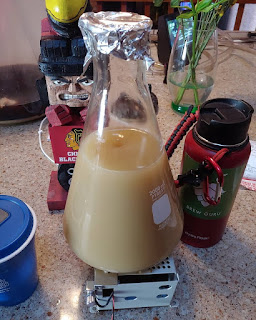 We have no way of knowing what hops are growing in Dave's back yard. He thought maybe they were Galena hops, but I don't think that is real likely.

Apparently, the Jamaican beer "Red Stripe" was born in Galena, Illinois, so it is very possible that these wild hops are descendants of the original Red Stripe hops farm.

I was not able to find what hops Red Stripe uses, but it is a very light lager without much hop presence at all. I've seen homebrew clone recipes that use hallertau hops. 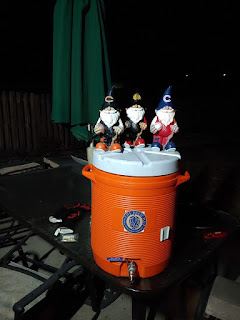 I decided I would make a pre-prohibition lager for the recipe. The grain bill is 2-row and oats. I added in some bittering hops and added Galena hops at 15 minutes for some flavor.

I used all of Dave's hops at the very end of the boil. 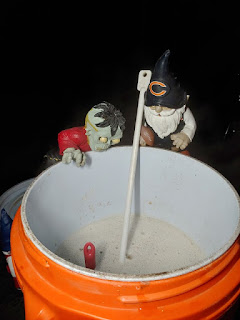 On Friday, I bought ingredients. Saturday, I made a starter. Brew day was Sunday.

I was up and started around 6AM Sunday. 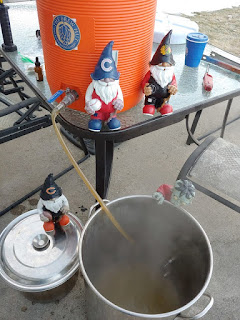 I got my strike water going and had the mash started before 6:30. I had to adjust the water a bit to get the mash to the right temperature, but it rested at 150 for most of the mash.

My pre-boil volume was a bit low, so I added some water. 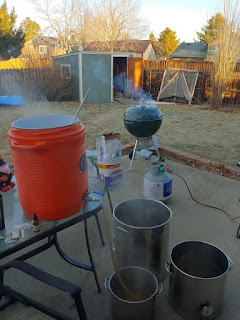 I started a hickory smoked chuck roast on the Weber kettle around 8AM. I smoked that for a few hours while the brew day went on. 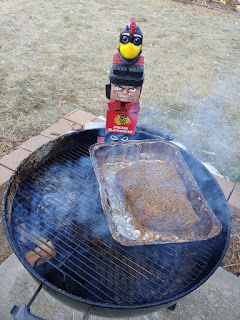 The boil went well. My gravity ended a bit low, and I made up the difference with about half a pound of cane sugar.

At the very end, I added in Dave's hops. 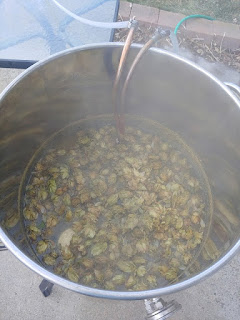 Then, I chilled the wort with the hose to about 90 degrees. I used the pond pump with ice water to get the wort into the 50's. 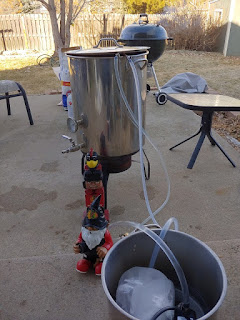 I was transferring the wort into the fermentor by 11AM.

The flowers clogged up my valve, so I ended up using the auto-siphon to transfer most of the beer. I did get some of the flowers in the fermentor. 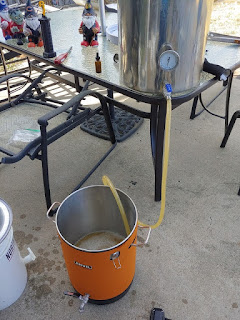 I got the beer stuff cleaned up by about noon. The beef continued on the smoker until about that time too, and then I brought it inside to finish in the crock pot.

At 1PM I went off on a little bike ride. 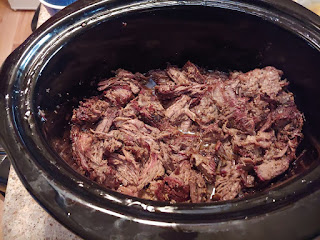 Around 5PM, I shredded the beef and let it continue to cook until dinner time around 6PM.

My son and I had sandwiches for dinner. My wife and my younger son had the beef without the sandwich part.

The beer has been fermenting in the garage for the past couple days. The temperature has been perfect for the beer to be right in the low 50's.

I'm looking forward to drinking this beer. I am not sure I'll get much flavor from Dave's hops, but we'll see. Regardless, it will be a tasty beer.