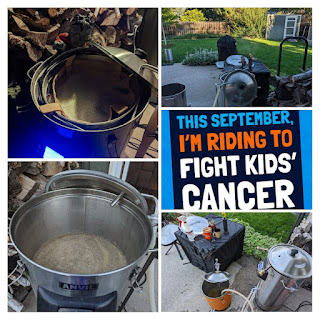 I'm getting ready to start riding for my Great Cycle Challenge. My 1000 miles starts September 1st, and I'll ride over the course of September to reach that 1000 mile milestone.
Over the 7 years I've ridden for the challenge, I've "met" several people on the facebook group and on Strava and who I consider friends.
On of my favorites is a dude named Brian Phelps.
Over the years, we've established a friendly competition. We keep an eye on each others' rides and yearly totals.
I hope that I inspire him almost as much as he inspires me.
When it comes right down to it, it isn't much of a competition. I am always ahead of him early in the year, but it doesn't take long for him to catch me and pass me up.
After July, I've been chasing him. We'll see how well I keep up with him in September. I suspect I'll do well at the beginning of the month, but fall behind him fairly quickly.
So ... I do a lot of riding, and Brian does significantly more. What makes this more remarkable is that he is 18 years older than me. His Strava goal this year is to reach 7000 miles as a 70-year old.
As you know if you follow this blog, mine is a measly 5000 miles.
As I mentioned, he is an inspiration. I hope I'm able to stay that active when I'm in my 70's. We'll see how well that turns out. 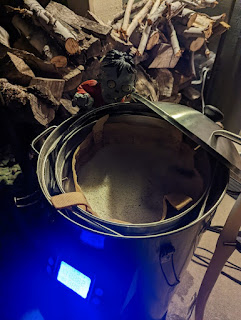 Anyway, this year I decided to name a beer after Brian Phelps. I don't know much about his beer preferences, so the beer is really something I thought I'd like ... a nice hoppy American Pale Ale ...
Brian Phelps Pale Ale
I brewed it this past weekend. 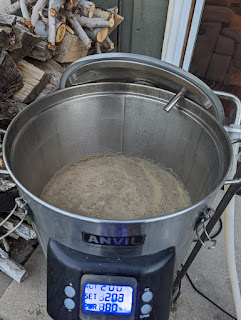 The brew day went very well. As usual I had the water prepared the night before to heat up overnight.
I got started around 4:15 AM. 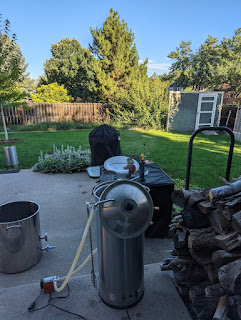 The mash and boil went pretty much as expected. My pre-boil gravity was a little low, so I boiled about 20 minutes extra to get to the right level before starting the boil-timer. 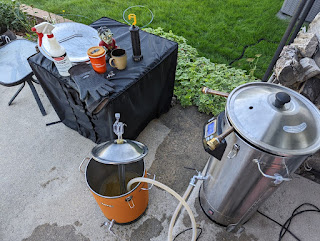 As a result, the OG was right on the expected 1.055.
I had the yeast pitched by 9AM
The beer has been fermenting. I'll probably keg next weekend, and I'm sure I'll have quite a few pints over my 1000 mile September.
As always stay tuned on the regular SheppyBrew Channels to see what is happening with biking, brewing, barbequing, and other things: SheppyBrew's Facebook Page; Sheppy's Twitter Feed; SheppyBrew's Instagram Page; and SheppyBrew's Website.Of course, don't forget to visit this blog often as well!
Go Bears!
Posted by ESheppy at 8/31/2022 08:18:00 AM