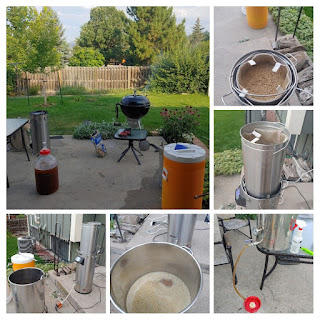 It's August in the Denver area. Hot. The highs have reached into the 90's pretty consistently for quite some time now.
As you know, if you remember my Lithuanian Farmhouse posts ... I go a Lithuanian Farmhouse yeast from a local brewery and have been propagating for over a year.
This yeast loves hot fermentation temperature. High 80's into the 90's are just fine.
Shoddy Pale Ale (Batch 288) used this Lithuanian yeast. I mentioned in that post that the beer is designed to make for a quick brew day.
As I mentioned in that blog post, I thought I could cut the brew day down even more by using my propane brew kettle for the boil (in addition to the overnight mash and half hour boil I used in that batch)
So ... on Sunday, I brewed up this batch with this small change to the process
Shoddy Pale Ale 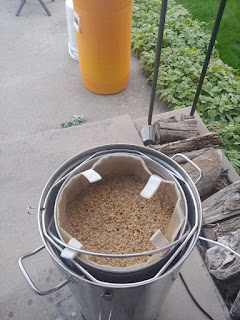 Saturday evening, I got a yeast starter going with my latest sample of Lithuanian Farmhouse yeast.
A bit later in the evening, I got my strike water up to temperature and then started the mash. Then, I went to bed.
When I got up a little after 6AM Sunday morning, I started a stop watch.
On my way through the kitchen, I noticed that my starter didn't really look like it was doing anything. More on that later. 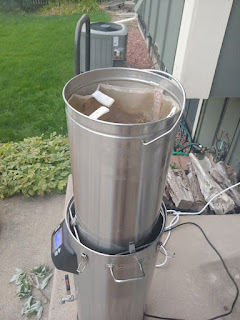 I headed outside to the patio, and pulled up the malt pipe to drain the wort out of the grain bed. Then, I started pumping the wort into my big kettle.
My OG was a little high, so I diluted the wort a little. 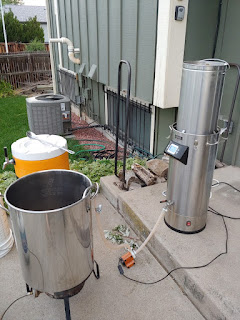 It didn't take nearly as long to get the boil going as it does in the Foundry. 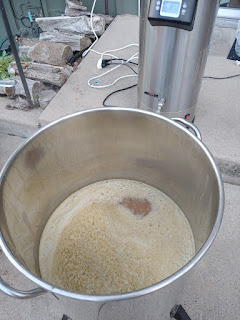 The boil went well.
With such a abbreviated brew day, it was a little hectic, but I got everything added when I had planned.
OG was just about right on plan. I only had to chill the wort into the 80's.
Yeast was pitched 1 hour and 16 minutes after I woke up. .... But it still didn't look like it was doing anything. I decided to let it sit awhile and see what would happen in the fermentor. 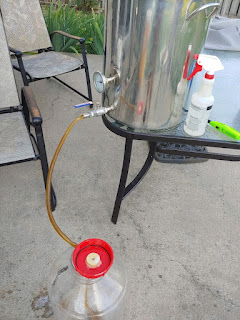 Because of the hectic brewing, I didn't have as much time to clean as I brewed. Overall, I'm not sure I saved a whole lot of time as last time.
Good to know. I don't think I'll be doing this hybrid approach with the propane kettle along with the Foundry again.
I got some chuck roast on the kettle and also went on a bike ride. 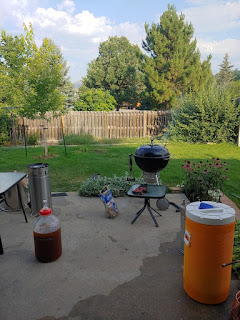 After I got back from the bike ride, the yeast was still not doing anything.
I called out to a couple of my local homebrew shops. I knew no one else had Lithuanian Farmhouse yeast, so I was looking for Kveik yeast.
Surprisingly, my closest HBS had none. So, I headed off to the 2nd closest and picked up a pack of dry LalBrew Voss - Kveik Ale Yeast. Actually, I picked up 2 packs so I'd have one spare.
I got back and pitched into the really warm yeast. This started up very quickly and things got back on track.
I'm a little mystified on how the Lithuanian yeast died off, and I'm sad about it. I might have to hit my buddy Mike up again for another pitch.
Regardless, it will be fun to compare how the Voss Kveik yeast works in this recipe. Bookmark Sheppy's Blog: Short and Shoddy or Sheppy's Blog: Kveik and you will find out shortly after I do.
In the meantime ... don't forget that you can always stay tuned on the regular SheppyBrew Channels to see what is happening with beer and other things: SheppyBrew's Facebook Page; Sheppy's Twitter Feed; SheppyBrew's Instagram Page; and SheppyBrew's Website.
Of course, don't forget to visit this blog often as well!