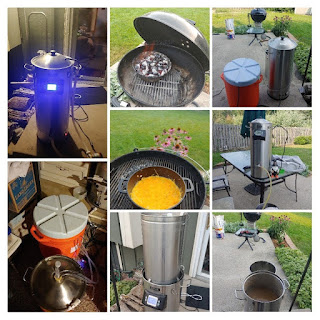 I brewed this past weekend.
You may have noticed that I am slowing down a little bit. Earlier in the year, I was on track to match the amount of beer brewed last year. Now, I'm tracking to brew about 20 less gallons.
We'll see how things progress going forward the rest of the year.
Sunday was my 293rd batch of beer that I've brewed in my brewing "career".
It was SheppyBrew's 17th batch of 2021, and the 22nd batch done in the Anvil Foundry.
It is the 2nd Mexican Lager in a row that I am making.
It is also the 2nd time I've brewed this particular recipe this year.
I really like this beer, and I am wanting to add it to my "Homebrew Colorado 6 Pack" to replace commercial beers that don't exist anymore.
Sin Lima Mexican Lager 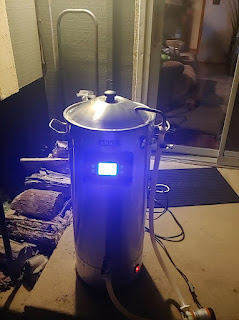 Like usual when brewing with my Anvil Foundry, I got started the night before by collecting the water with its salts and acid additions. I also made a starter made from yeast harvested from the last brew ... T.Ra.Sh. Light.
I set the timer to start heating the water overnight so that it was up to temperature when I woke up. 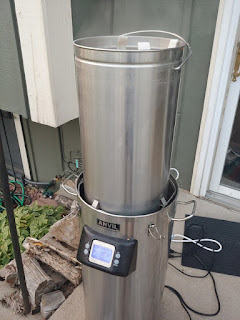 I mashed in as soon as I woke up, and started the pump.
While mashing, I made a Smoked Green Chili Hashbrown Egg Bake for my family to have for breakfast. 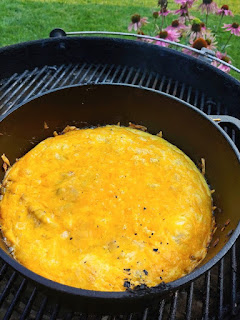 The mash went a little longer than my usual time, but not a whole lot. My pre-boil gravity was exactly on target. 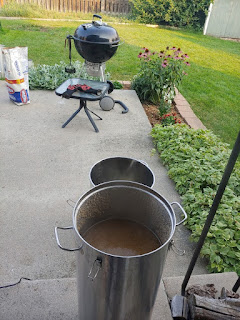 The boil also went as expected. 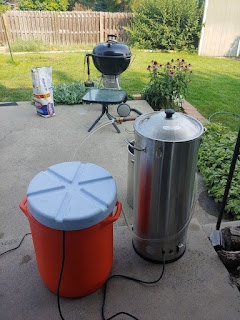 I chilled to around 80 degrees F with my hose. Then I switched to ice water recirculated with a pond pump.
I was able to get the wort down under 55 degrees. 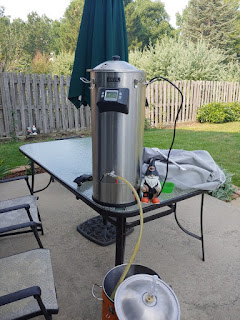 I used the Anvil cooling system to get the wort down to 50 degrees and pitched the yeast fairly soon after moving the fermentor to the basement.
Fermentation was a little slow to start. I think I might have underpitched.
But it was going strong by the middle of the next day. I'm sure it will work fine. 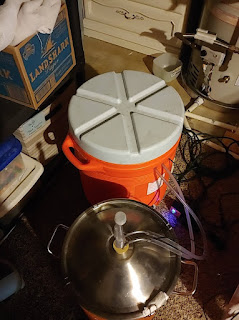 I'm looking forward to drinking this and comparing to Ska's Mexican Logger. If you want to know how that turns out ... keep an eye on Sheppy's Blog: 6 Pack Project.
To follow along with the evolution of Sin Lima ... watch Sheppy's Blog: Sin Lima.
And ... as always, stay tuned on the regular SheppyBrew Channels to see what is happening with beer and other things: SheppyBrew's Facebook Page; Sheppy's Twitter Feed; SheppyBrew's Instagram Page; and SheppyBrew's Website.