Remember a couple weeks ago I brewed a double batch of McShepardSons Irish Ale (Batch 308)?

In one fermentor, I pitched Voss Kveik Ale Yeast. In the other I used SafAle English Ale.

Friday after work, I decided to compare the two beers. 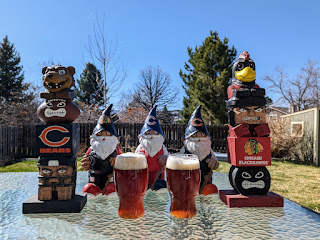 They are both beautiful red ales, but the colors are slightly different. The kveik ale is just a touch darker. I think this is mostly due to the Voss beer having more time to clarify.

At the moment, the Voss beer is slightly more carbonated, but again that has more to do with time than an actual difference in the beer. 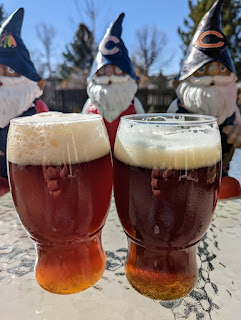 As the comments on the SheppyBrew Recipe page, McShepardSons Irish Ale (double batch), say ... On the Voss beer, I've noticed the same "lemon pith ester" that I detect in most Kveik beers. It comes across a bit drier and a little more bitter.

Comparing the beers side-by-side, I thought the same thing.

Just to combat expectation bias, I got out my opaque "triangle test" glasses. As introduced in Lithuanian Autumn vs. Falling Leaves.

Then, I shuffled the cups up until I had no idea which beer was where. 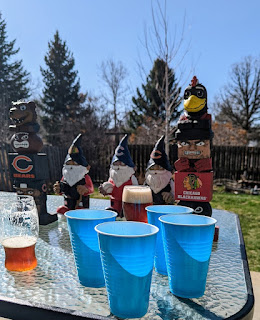 I randomly removed one of the cups and moved it to the side. Of the remaining three beers, I did a standard "triangle test", trying to detect which one was the "odd beer out".

In this case, I had two English ale beers and one Kveik ale beer.

It was fairly easy to tell the beers apart, although not quite as easy as I thought it would be.

The two beers are fairly close, but different enough for me to tell the difference in a blind tasting.

I enjoy both beers. I actually am not sure the Voss beer will last very much longer. The keg already seems to be noticeably lighter.

Luckily, I brewed another batch of beer this weekend. Stay tuned to find out what that was.