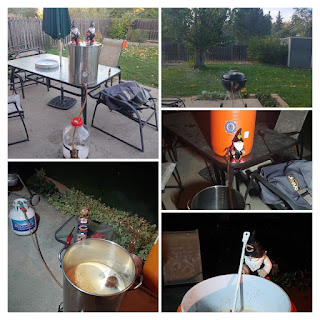 It is autumn.
The weather is getting cooler and the leaves are beginning to fall.
... and you know what that means .... right?
Time to brew my Falling Leaves Autumn Saison.

Falling Leaves is, of course, the Autumn version of my Seasonal Saisons series of beers. It is darker in color than the Spring and Summer Saisons, but not as dark as the black Winter Saison.
Last Sunday, I did. I brewed it. I brewed the SheppyBrew Autumn Saison.
Obviously, I brew a lot of saisons. There isn't any question that I brew more saisons than any other style of beer. 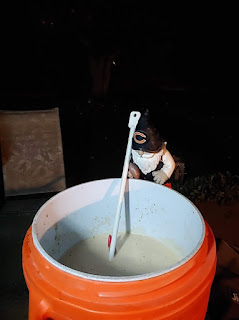 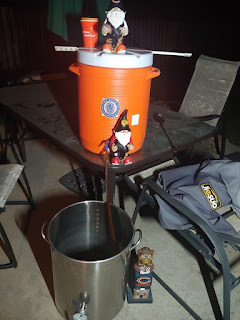 If I'm honest, I think commercial breweries have gotten better at making saisons that I like. But, when I make it myself, I know it is going to be what I think a saison should be. 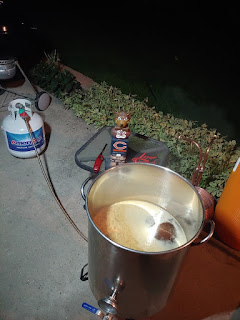 Anyway ... this Sunday ... I got started even earlier than is usual for me. I started in the dark. In fact, most of my brew day was before sunrise.
The mash went very well. This is a beer that I add pumpkin too even though I don't really think it adds more more than a slight orange tinge. Maybe a little mouth-feel, but I would be willing to bet that it isn't something I'd notice even if I compared with an without pumpkin in a blind taste test. 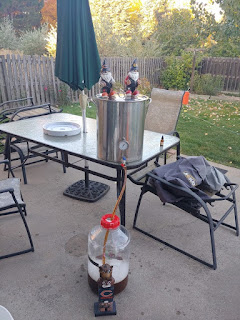 The boil was uneventful. I added in the whirlflock and yeast nutrient, even though the recipe doesn't call for it. I guess I'm just so used to adding those two things I don't even think about it. Doesn't hurt anything though.
I got the wort chilled into the 70's and then racked into the fermentor.
I pitched the yeast and was actually done with the brew day before 8am.
The fermentation was going strong by the next day. I expect to keg sometime mid-to-late next week.
I'm certainly looking forward to having my Autumn Saison on tap.
I'm sure I'll have some too and likely tell you about it on the regular SheppyBrew Channels to see what is happening with beer and other things: SheppyBrew's Facebook Page; Sheppy's Twitter Feed; SheppyBrew's Instagram Page; and SheppyBrew's Website. Of course, don't forget to visit this blog often as well!