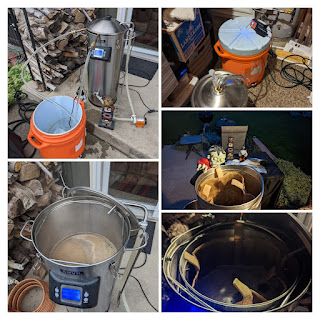 Recently, I brewed Jethro Bud Nelson Merican Lite Lager for the second time (see Jethro Bud Nelson (Batch 319)).
For whatever reason ... I've been into Craft American Lagers recently. It seems to be a trend ... and I am following along.
Last time I brewed Jethro Bud Nelson, I didn't get to drink much of it. I took the beer to a family vacation at the Lake of the Ozarks and the family there finished off the keg in a couple of days.
So ... I knew I was going to brew it again sooner rather than later.
As I was Drinking my Merican Lite Lager, I noted that it would be great to have it on tap at the same time as my "Merican Premium Lager" ....
Mr. Awesome Merican Lager
Last Saturday, I kegged the Jethro Bud Nelson, and last Sunday I brewed Mr. Awesome, so I should get the chance to try these two beers side-by-side. 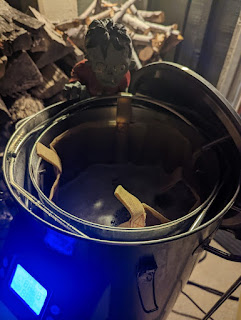 As usual, I prepared my brewing water the night before and set the Foundry to heat up the water while I was sleeping.
Up around 4:30 AM, I started my mash. 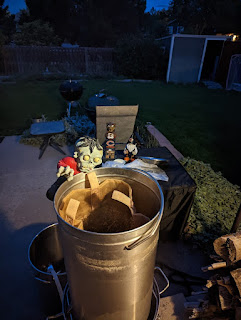 Brew day was pretty typical. Mashed for around 90 minutes. Drained the wort. Started the boil. Added ingredients at the proper times.
The recipe I use for this beer is modeled after the information available for the New Belgium's Beer "Mountain Time Premium Lager".
Pale malt. Lager Yeast. Nugget, Willamette, and Cascade hops. Around 4.4% ABV. 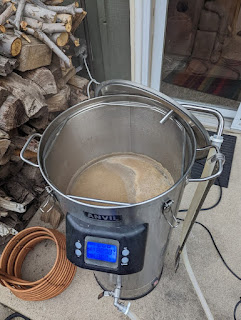 To keep the bitterness down in the BJCP American Lager range, the recipe calls for the "bittering" hops to be added around the 10 minute mark. Then, since I don't really want to break up ounce bags of hops, I add 2 ounces of flavoring hops.
So, this beer has 2.5oz of hops in the "flavoring / aroma" time ranges, resulting in a beer that is probably too hoppy to actually fit in the American Lager category.
But it is my beer and that is how I wanted to make it. 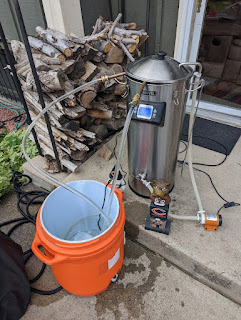 I was chilling the wort around 8:00 am, and had the beer in the fermentor before 8:45. I pitched harvested yeast from that Jethro Bud Nelson batch.
The airlock was bubbling Monday some time. I was expecting it to start a bit faster with the harvested yeast, but that's ok.
Typical of my lager beers, I fermented cold for the first 5 days or so. I'm letting it go to ambient temperature to finish off another week.
I should keg it this weekend or early next week. 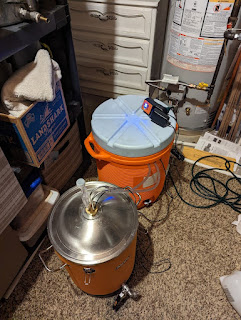 And then ... I'll have both Mr. Awesome and Jethro Bud Nelson on tap at the same time. Stay tuned for a comparison blog post on these two beers.
I can't wait. Can you?
Anyway ...
As always stay tuned on the regular SheppyBrew Channels to see what is happening with biking, brewing, barbequing, and other things: SheppyBrew's Facebook Page; Sheppy's Twitter Feed; SheppyBrew's Instagram Page; and SheppyBrew's Website.Of course, don't forget to visit this blog often as well!
Go Bears!
Posted by ESheppy at 10/07/2022 06:33:00 AM