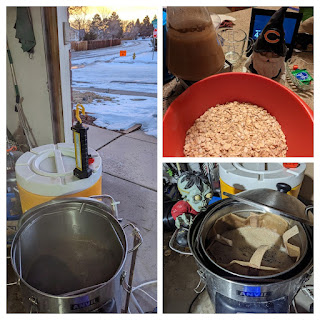 In BJCP 2021 Style Guidelines and Followup on BJCP 2021 Style Guidelines, I mentioned that there were a few entire categories of beers that I had not brewed.
Of course, this is something I wanted (and still want) to rectify.
The categories I'm missing were:
16. DARK BRITISH BEER
17. STRONG BRITISH ALE
26. MONASTIC ALE
Last Sunday, I brewed a Category 16 Dark British Beer. More specifically, I brewed a 16B. Oatmeal Stout.
Shortly after those posts, I developed a recipe for a 16B. Oatmeal Stout. Last Sunday I finally brewed it.
Grumkins and Snarks Oatmeal Stout 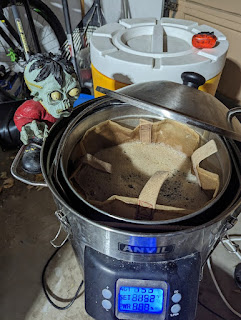 The name "Grumkins and Snarks" refers to mythical creatures that are mentioned in Game of Thrones. I don't remember adding these to the potential beer names list, so I don't know if I got the name from one of the books or the shows, but when thinking of names for this beer, "Grumkins and Snarks" jumped out at me from the list.
I think the name is pretty cool, and it seems to fit well with a dark beer. 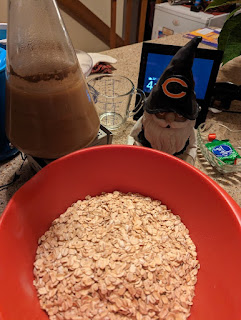 Due to recent snows, this was a garage brew (as opposed to an outside brew).
I started the mash at the same time I was "toasting" flaked oat in our oven. I'm not sure how much difference it will make, and I don't know that I did it as long as suggested, but I've heard this is a good idea for oatmeal stouts.
20 or 30 minutes into the mash, I added the oats. 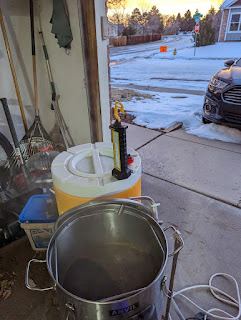 Other than that, the brew day was pretty standard.
The pre-boil gravity was a bit high, so I diluted. I diluted a bit too much so I boiled a bit longer.
By the end of the boil, my OG was right on plan.
It is nice how fast chilling goes in the winter.
After the brew day, I got to go out on my bike in the snow. So much fun. It was one of those days I wished I had a fat bike, but that doesn't really matter. 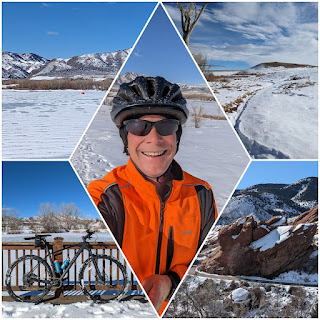 I had harvested this yeast from the X-Mas Ale, and I had a bunch of highly active yeast pitched. The airlock was bubbling by fairly early in the afternoon.
I probably could have gotten away with no starter, but whatever.
As I write this, fermentation appears to be done. Yesterday I took a little sample. It doesn't look quite as dark as I thought it would be, but still in-style. I thought the sample tasted good.
I might keg before this posts.
I am looking forward to trying this beer.
As always keep watching the regular SheppyBrew Channels to see what is happening with my BBQ, Beer, Biking: SheppyBrew's Facebook Page; Sheppy's Twitter Feed; SheppyBrew's Instagram Page; and SheppyBrew's Website.Of course, don't forget to visit this blog often as well!
Go Blackhawks!
Posted by ESheppy at 1/15/2023 01:59:00 PM