Well, until about 3 days ago, I thought September had an excellent chance of beating August for this blog's all-time page view record. The past 4 days have seen pathetically little traffic, though. I'll have to live with the 3rd all-time behind August and March. It is my own fault, of course. I've only published 2 posts in the last two weeks. I have not really been "feeling" motivated to sit down and blog much.

Regardless ... no one really cares. Heck, I don't even care.

But, as I have been doing for quite awhile, it is now time to share what posts were most viewed this month:

#1 Bottling the X-Mas Ale  Nov 24, 2012 ... Not quite sure why this post got so much attention this month. I'm sure part of attention came from the fact that I published and brewed my 2013 X-Mas Ale recipe this month. I don't think that is the whole story, though, because Brewing the 2013 X-Mas Ale didn't get nearly as much traffic. 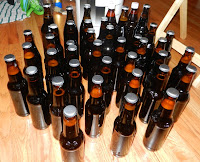 #2 All-Grain Version of the White House Honey Porter  ... #6 on the all-time page view list. This recipe has been pretty popular since I first posted it. I'm thinking that maybe I should get this beer on the brewing schedule. 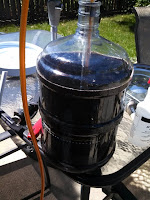 #8 Pale Ale Dec 20, 2011 ... #4 on the all-time page view list. This is really a plea to beer drinkers to stop discriminating against beers based on color. I think most people who come look at this post are doing it for the cool SRM color chart.


October, is obviously GABF month, and that usually does very well on this blog. Hopefully, this will get me properly motivated to sit down and blog. Hopefully, if I start writing more, the traffic will pick up.